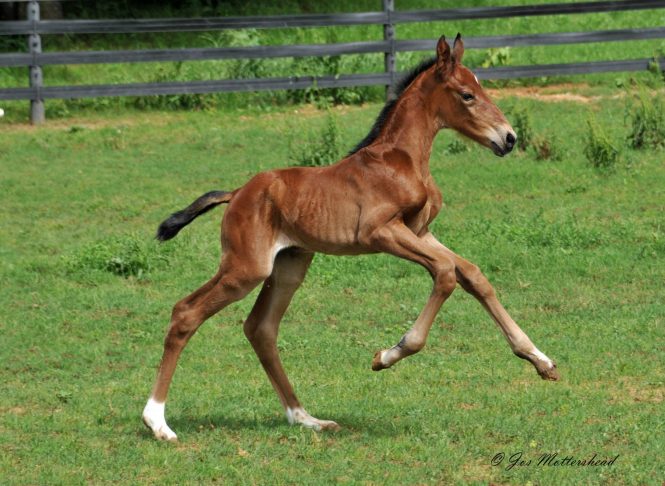 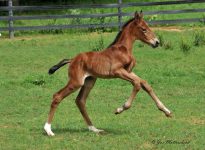 It’s a question periodically asked, and durations as long as 10-50,000 years have been suggested as answers, but although that sounds good, what is the actual known duration of viability of stored frozen equine semen?

Last year, Equine-Reproduction.com LLC was asked to assist in fertility evaluation of semen frozen from the great Olympic show jumper “Galoubet A”. Galoubet himself had died in 2005, and the semen had been frozen in the mid to late 1980’s. Two pregnancies were established, although one was lost between 45 and 60 days of gestation, despite having developed a heartbeat. The second pregnancy successfully proceeded to term and the filly shown at left – “Galoubelle d’Avalon”, owned by Avalon Equine is the athletic result, seen here at just 2 days of age! It is thought that this foal may be the first offspring of Galoubet A to have been produced by the use of frozen semen since the stallion’s death.

The dose of semen which resulted in the failed pregnancy had been frozen in 1987. We cannot of course determine if the loss was related to the semen, although the mare bred was a young mare with a sound reproductive evaluation. The semen which resulted in Galoubelle d’Avalon had been frozen prior to 1987, with the straws carrying no freeze date or having accompanying information. It is thought however to likely date from about 1985-86. From this, we can safely say that frozen semen if stored correctly will maintain fertility for at least 28-30 years!