* The term “quarantine facility” although often used in this context for a facility for semen export is technically incorrect.
The correct term is “pre-export isolation facility”

Equine-Reproduction.com LLC operates a USDA-approved equine semen export facility for collection of frozen horse semen for export to Australia, New Zealand, the United Kingdom, European Union and Brazil. Preparation for semen to other countries can also be accommodated.

Typically semen being collected for export to countries other than Canada must be collected under specific conditions which may include: 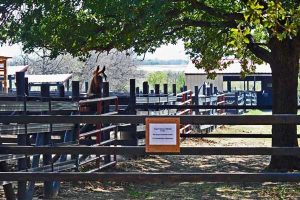 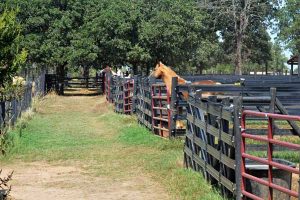 Stallions at the Equine-Reproduction.com LLC isolation facility are housed in adjacent individual pens (separated by an aisle) with a run-in (loafing) shed in each pen 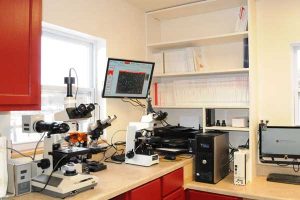 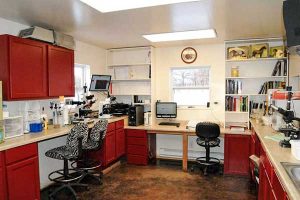 A well-equipped laboratory allows us to evaluate semen using CASA and fluorescent microscopy to ensure quality control and accurate reporting of semen quality. 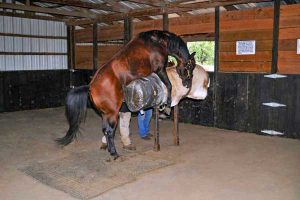 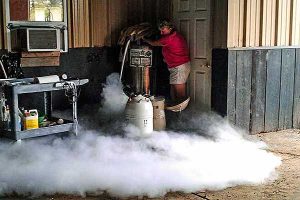 Please note that these are estimates only, and may vary depending upon circumstances!

How many doses of frozen horse semen will I get per ejaculate?

This is a question we are commonly asked for non-export freezes as well. Unfortunately, it doesn’t have a definitive answer as it is entirely stallion-dependent! Some stallions produce more sperm per ejaculate, and others fewer. As each dose is carefully calculated to contain a specific number of sperm, obviously the more sperm in the ejaculate, the more doses. All we can offer as a rough guide is that the average stallion ejaculate contains enough sperm for between 5 and 15 doses and that over the thousands of ejaculates that we have frozen, the average number is around 12 doses per ejaculate.

How long will it take?

This will depend somewhat upon the destination. Many countries require a 30 day pre-export isolation period before testing or semen collection can be started. Many countries have very specific timing requirements for testing. Once testing has started for example, most countries require a minimum of 2 sets of CEMO swabs be taken one week apart and then cultured for a minimum of 7 days, so that alone will take over 2 weeks. Some countries may require additional swabs. Although other tests (e.g. EIA, EVA) can be taken during that time frame as long as it is within the country’s timeline requirement, it is possible that freezing may not be able to be started for about 6 weeks after the entry into the pre-export isolation facility – once test results have been returned negative. If there are issues with any of the test results, then the duration may be longer. It does however vary from country to country, so these timelines are not absolutes.

What does it cost to export frozen horse semen?

The estimated production costs are outlined above. From those figures and working on a presumption that your stallion is producing the average of 12 doses per ejaculate, to freeze 48 insemination doses would cost approximately $4,500 which works out to about $94 per dose – although of course this is just a rough estimate. Shipping costs can vary tremendously depending upon the destination.

I want to ship to a country that doesn’t appear on your list. Can you freeze semen for shipment to that country?

Almost certainly, yes. We will however need to know what testing and other requirements are in place for that country. We do have access to a reasonable number of requirement details through USDA, however if they do not have details available, you will need to obtain them from the importing country and provide us with them. A list of countries and their details available through the USDA website can be found here.

Do you market semen overseas?

No, we do not market our client’s semen either domestically or overseas. This avoids all possibility of conflicts of interest between competing client’s stallions.

How do I export the semen?

The semen is normally packed in a suitable vapour (“dry”) shipper which can then be shipped via courier or airline. Paperwork must accompany the semen, and that paperwork must be signed by our staff veterinarian and stamped by the USDA office. For many countries, the recipient of the semen may have to obtain an import permit, which often then must be sent to the exporter to accompany the shipment. We can facilitate all of the export paperwork and shipment, although the recipient will need to obtain the import permit (if required) and send it to us.

Do you have a network set up where we can store semen overseas?

While we do not have a network set up per se, we can arrange storage and distribution in a variety of countries, including Australia, England and Ireland.

How do you recommend marketing the frozen horse semen – by the dose or by the straw, with a live foal guarantee (LFG), or without?

This is actually a somewhat complex problem that is encountered domestically as well as Internationally. As a stallion owner, your “goal is a foal” and a satisfied customer. We therefore recommend marketing frozen horse semen in a way that will achieve those ends if possible. With domestically-used cooled semen that is reasonably easy of course, with the use of the LFG, but once the semen has left the country, that becomes more complex. In an ideal situation, 2 or 3 insemination doses are shipped to the mare owner, allowing the use of a timed insemination protocol. This makes the inseminating party’s job easier, typically reduces the mare owner’s costs, and makes everyone happier – and remember that a happy customer is the first step towards a repeat customer! IF the mare does not become pregnant, we suggest that additional doses may be purchased for use to achieve the LFG at something around the production and shipping costs. This mimics the already-accepted protocols seen in North America with cooled semen – if a mare does not become pregnant, then additional shipments can be obtained upon payment of collection and shipping charges.

If one has concerns about multiple mares being bred, then inclusion of a clause in a contract can prevent that from (legally) happening. It becomes far more complicated however when one is selling semen through a third party such as a semen broker and/or overseas. At this stage, many opt to market the semen “by the dose” (for a single insemination) or even “by the straw” (in the case of multiple straws making up a dose) – both with no LFG. It is worth considering that if the semen is being marketed in these latter styles with no LFG, then the mare owner is assuming an increased risk, as the simple fact is that not all breedings result in a pregnancy. If there is no LFG to fall back on, then there needs to be some form of encouragement to buy semen marketed in such a manner, and that may be a lower price, or no restriction on the number of foals being able to be produced from the semen purchased. We do urge stallion owners to be cautious however, as increasingly we are seeing resistance in mare owners being faced with no LFG semen purchases and a limitation of return at the same cost as other stallions offering a LFG.

I have read about “splitting doses” and multiple mares being bred and having foals from a single dose of semen. Obviously as a stallion owner, we want to market the semen with the intention of one foal per stud fee we receive. How – if the semen is being sent to someone we don’t know overseas – can we achieve that?

This issue has come about as a result of the use of ½ ml straws which were originally designed for use in bovine breeding (and for which all automated straw filling equipment is designed). When breeding a cow, a single ½ ml straw typically represents an entire insemination dose, but with a horse, a greater number of sperm are typically required to achieve good levels of fertility using standard insemination techniques. Consequently, when using the ½ ml straw for the equine, it is common that 4 to 8 straws are required for an entire insemination dose. Several years ago, in order to use a lower number of sperm following semen sexing (which resulted in a reduction of potentially viable sperm being harvested from an ejaculate), an insemination technique was developed that placed the small dose of semen right at the oviduct. This technique is called “deep horn insemination” and may be achieved using a videoendoscope, or a flexible insemination pipette. Acceptable pregnancy rates have been achieved using as few as 1 million sperm, so the use of a single ½ ml straw – which commonly contains around 200 million sperm – results in many cases in pregnancy rates comparable to use of an entire insemination dose. The use of deep horn insemination and splitting doses has encouraged many European stallion owners to either sell semen by the (½ ml) straw, or to reduce straw numbers included in a “dose” to perhaps only 2 straws.

We avoid this possibility to some extent by making use of the 5-ml “macro” straw. We pack an entire insemination dose into this single straw – which is about the size of a drinking straw – which reduces the chance of the insemination dose being “split” as it is difficult to be able to synchronise two (or more) mares to ovulate within 6 hours of each other in order to be able to use half of the dose in one mare and half in the other, once this larger straw is thawed (this does not of course solve the problem if more than one straw is being provided per shipment, which would require contractual limitations being placed to alleviate the issue if so desired). There has been debate for many years as to the “best” size straw, with arguments being made for and against both sizes. While it can be argued that a more even freeze may be obtained with the thinner ½ ml straw, we have not seen a reduction in fertility as a result of the use of the larger macro straw – which is also considerably easier to handle. To the best of our knowledge, there is no definitive (peer-reviewed and published) research that has accurately compared the fertility results of freezes in the two different size straws. There has been research that commented on different freeze results, but further investigation of the research indicated that not only were different sized straws used, but that different extenders had been used in each of the two sizes, so comparison is not valid.

I have a semen tank at home, can I store the semen there?

Semen frozen for export has to remain at a USDA-approved semen storage center until it is exported if the export status is to be maintained. If the semen leaves such a facility prior to export unless it is in a container sealed with a USDA seal, or some other form of adequate seal (if being moved to another USDA-approved facility), the “export” status will be lost. If your own facility is not an approved facility, you therefore should not store the semen there.

Hopefully this has answered a few of your questions – if you have more, or would like to book in your stallion for freezing, please do not hesitate to contact us