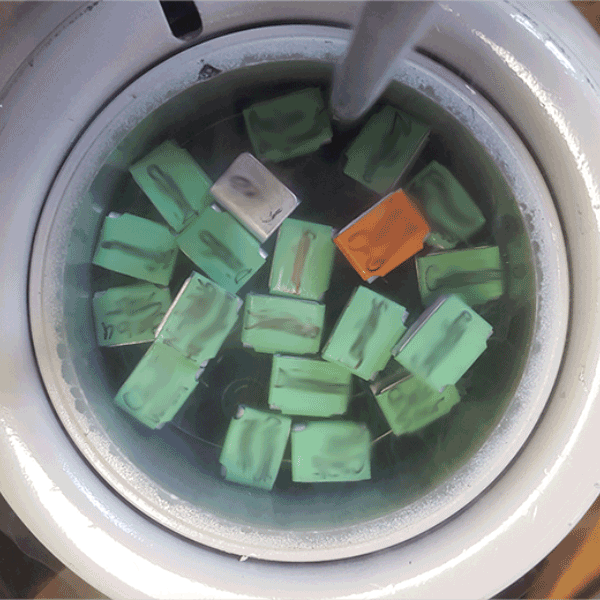 Frozen semen preparation and use

– An overview of frozen semen – Part 2 of a two-part article which appeared in the “Canadian Morgan” magazine in the November 2000 issue.

By Jos Mottershead
Part 2; published in “Canadian Morgan” Magazine, Nov/Dec 2000 issue.
Part 1 is in this link

Mare Monitoring and the Insemination Process

From the mare owner’s perspective, the use of frozen semen has many advantages, not the least of which is that there is the opportunity to breed to a stallion that may not be local, and yet not have to worry about semen transport and having it arrive in a timely manner relative to ovulation. Frozen semen can be ordered months or even years prior to its use, and be stored in a nitrogen tank on farm, or at the inseminator’s facility.

On the “down” side, the successful use of frozen semen requires more intensive mare management than fresh or cooled semen inseminations and more attention to detail.

To achieve the best pregnancy rates using the least number of straws, it has been seen that the most efficient protocol calls for insemination no more than 12 hours before, or six hours after the mare ovulates. This means there must be an intensive monitoring by either rectal palpation or ultrasound, or a combination of both. Generally it is accepted that when close to ovulation, checks should be made every four to eight hours [newer research suggests this may be extended to 12 hours]. Hormonal manipulation is of great use under these circumstances, with the use of hCG (human chorionic gonadotropin) or the synthetic GnRH Deslorelin implant “Ovuplant” being the most favoured [this has been withdrawn from the market in some countries, notably the USA, and has been replaced with other products such as “Sucromate” or compounded Histrelin]. Timely use of these may actually increase the chance of ovulation through the day, which is convenient to say the least! A full hormonal control using the combination progesterone and estradiol may even assist in setting the ovulation to be on a specific day.

If the number of straws available is not limited, and palpations or ultrasounds are not an option, there has been success achieved by insemination daily in the evening, commencing on the third day of “standing” estrus, through to its cessation. As there are other associated negatives, this method should not be considered unless there is absolutely no alternative.

[Since the original writing of this article, a “timed insemination protocol” has been developed, which combined with the use of an ovulation promoter required insemination at 24 and 40 hours after the promoter is used. This results in good coverage in the peri-ovulatory period. We have an article on the website which discusses timed insemination]

Transfer of the straw from the storage tank to the water bath for thawing must be facilitated as rapidly as possible. Thawing of the semen within the straw starts to take place at room temperature after only four seconds, and as a “rapid thaw” is critical to obtaining minimum damage to the sperm during the thawing process, damage will occur if the thaw takes place at room temperature.

Ideally, the name of the stallion that is printed on the straw should be checked prior to its being thawed, but this is not always possible [as the straw may frost up]. The canisters within a tank are all numbered, and a record log should be kept identifying what straws are kept in which number canister. Raising the canister in which the desired straw is stored up to the frost line of the tank will permit an easier access that may facilitate the name checking but avoid sperm damage. As long as the straw is kept below that frost line, the temperature is not high enough to cause damage to the sperm.

Once a straw is selected, it is ideally removed using forceps with tips especially recessed to permit their secure holding of the straw. Many people use their fingers, but this raises the temperature of the straw at the point with which the fingers and straw come into contact with each other. If the stallion’s name on the straw has not yet been identified, another attempt can be made at this stage prior to plunging the straw into the hot water bath. Remember though that there’s only a four second window!

Straws are thawed for a specific period, in hot water of a specific temperature, and following straw thawing protocols set out by the freezing facility (which information will ideally accompany the semen shipment) is essential. Usually these facilities will thaw one or more straws per freeze to establish best thawing rates (if they are not already known), and to review sperm post-thaw motility. Post-thaw sperm motility is not specifically related to overall fertility, but low progressive motility (lower than 30%) may indicate a potential problem, and often straws with such low motility are not released for commercial use. There are however instances of low progressively motile post-thaw sperm achieving good pregnancy rates, as well as the converse – sperm with high progressive post-thaw motility achieving none – so mare owners should always be prepared to ask what the “first-cycle pregnancy rate” is with frozen semen from a particular stallion (note: “first-cycle” not just “pregnancy rate” – 100% conception rate that requires six cycles to achieve is not a good selling point!)

The two sizes of straws require different thawing temperatures and times. The half-ml straws are typically thawed in a 37°Celsius water bath for a minimum of 30 seconds. There is another protocol for the half-ml straw which is recognised as producing marginally better results, but it calls for 70° Celsius water for only seven seconds, followed by 35° water for at least 5 seconds, and timing is so critical that an error of only a couple of seconds or degrees can make a significant difference. That low margin of timing error, coupled with the fact that the high water temperature is not always attainable is recognised as making this second thaw method usually not practical for use in other than the research or laboratory domain.

There are a variety of times and temperatures recommended for the thawing of the “macro” straw, ranging from 40 to 52 seconds, and 45° to 52° Celsius temperature water.

Use of the half-ml straws will usually require the thawing of multiple straws to obtain the desired insemination dose of greater than 200 million progressively motile sperm. It should be noted however, that there are a few freezing locations in the US and Canada that freeze an entire insemination dose in a single half-ml straw, so careful review of the supporting documentation is essential before thawing occurs. If multiple straws are required, they are usually thawed singly and pooled together prior to being drawn into the insemination syringe. Alternately, there is a type of insemination pipette available from the company “Minitube” called the “Universal pipette” that permits the introduction of multiple individual straws into the pipette for insemination one after the other, without removal of the pipette from the mare’s cervix, thereby negating the need for pooling.

In both cases, where an insemination syringe is used, it is essential that an all-plastic syringe be used to avoid the possibility of the sperm toxicity sometimes seen with regular syringes.

While minimum delay is essential from thaw time to insemination, it is recommended that a small sample of thawed semen from each straw be warmed and evaluated prior to its use. Semen that shows progressive motility substantially lower than that advertised should be used with caution. It has been established that sperm add dramatically to the uterine inflammatory reaction normally seen post-breeding. If such a reaction is more severe than normal, it is possible that the uterine environment may be so severely compromised that even if a pregnancy is achieved, without management early embryonic death may occur as a result. Additional post-breeding management (lavage and/or oxytocin protocol may be required to reduce such an effect and improve pregnancy rates.

The insemination process when using thawed-frozen semen is no different from that performed for fresh or cooled semen. Aseptic techniques should be observed, with a pre-breeding perineal scrub, reverse gloving of the inseminator’s arm, and use of only sterile lubricant and supplies. [Since the original publishing date of this article, deep-horn or deep-uterine insemination techniques have been developed and are commonly used, in particular with low-dose or poor quality frozen semen. As these techniques require manipulation per-rectum, they are often only performed by the veterinarian.]

The use of multiple doses of oxytocin and uterine lavage post-breeding have been shown to increase pregnancy rates in those mares that experience delayed uterine clearance during use of fresh or cooled semen. As there is known to be a potential for a greater post-breeding uterine inflammatory response when using frozen semen [owing largely to the reduction in presence of seminal plasma which is a mitigant as well as concentration of the sperm, which are the irritant], the use of the combination has been widely advocated as a precautionary measure regardless of the mare’s uterine clearance ability. The first dose of oxytocin is typically given no sooner than four hours post breeding, which allows the progressively motile sperm sufficient time to reach the mare’s oviduct. More details of post-breeding treatment protocols are offered in our article about the oxytocin protocol.

Frozen semen is not complicated to use from a mare owner’s perspective, although it is advised that a veterinarian well versed in reproduction, or a competent AI technician be used.

For both mare and stallion owners, new markets become available, as with frozen semen speed of shipping duration is no longer an issue, which means that the semen market becomes truly global.

From the stallion owner’s point of view its use is a little more complicated, and does require some initial financial outlay. The average stallion facility will not have sufficient laboratory equipment or technical knowledge to freeze semen, so the majority of owners will retain the services of a freezing firm. Although initial outlay for freezing of a single ejaculate seems expensive, when one considers that the whole ejaculate is used to its maximum efficiency, and that 15 or more insemination doses may be established from the single ejaculate, the cost of a single insemination dose in fact is cheaper than most commercially prepared cooled semen shipments.

Convenience of use is the most acceptable feature for both mare and stallion owner. We have already discussed how the mare owner may order semen months in advance of its anticipated use date, but convenience of timing is also available for the stallion owner. If the stallion is competing during the breeding season, there is no need to interrupt show schedules by either breeding a mare or collecting semen for shipment. The semen can already have been collected in the “off” season, and frozen and stored for future distribution, thereby avoiding interruption of the stallions mental attitude by breeding. The “insurance aspect” for the stallion owner is also of tremendous value, with the knowledge that semen will still be available in the unfortunate event of the stallion’s injury, infertility or death.

[Again, 20 years have elapsed since this article was first published, so although trepidation is still present with some, it is no longer considered a “new” tool!] Frozen semen is a comparatively new tool in many breeder’s toolboxes, and as with any new tool, until its use is understood, there is trepidation felt by some. There is however little need for concern as long as mare preparation is meticulous; fertility of the stallion’s frozen semen is proven; all recommendations made by the freezing facility (or the stallion owner) with regards to the semen and its thawing are followed; insemination is made in a timely manner; and any required follow-ups (including confirmation of ovulation!) are carried out.

© 2000, updated 2020 Equine-Reproduction.com, LLC
Use of article permitted only upon receipt of required permission and with necessary accreditation.
Please contact us for further details of article use requirements.
Other conditions may apply.