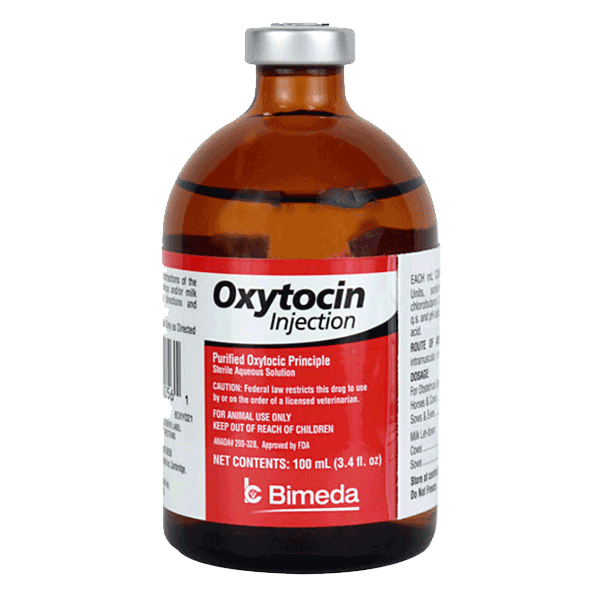 Oxytocin use in the mare during breeding

– Delayed Uterine Clearance and Breeding-Induced Endometritis problems can be helped by Oxytocin use when breeding a mare!

Oxytocin acts on smooth muscle in the body, causing it to contract. One such area of tissue, which is of tremendous importance relative to breeding, is the mare’s uterus and so oxytocin use when breeding a mare can be a truly beneficial aid to improving pregnancy rates.

It has been recognized for some time that fluid build up in the uterus can be detrimental to establishing or maintaining pregnancy, and with a view to removal of such fluid there has been research into the use of oxytocin.

Up to 2 cm depth of fluid can usually be treated with oxytocin alone; more than 2 cm may require lavage as well

Uterine fluid is most commonly seen by ultrasound post-breeding, and is usually present as a result of a natural response to a foreign object in the uterus – semen. In most mares, this fluid poses no problem to the establishment or maintenance of pregnancy, and is cleared within 24 – 48 hours or less by the mare herself. In some mares however, especially older multiparous mares, or mares with poor reproductive conformation, a condition known as “delayed uterine clearance” may occur. This results in the fluid not being cleared, and will typically result in at least a low-grade endometritis (and sometimes a significant inflammatory response). This causes the conceptus to encounter an inhospitable environment when it enters the uterus about 5½ days post-ovulation, with a high risk for subsequent pregnancy loss.

Uterine fluid encountered in estrus mares during an ultrasonic evaluation prior to breeding (often during an examination of the follicular status of the ovaries) has been identified as being detrimental to establishing or maintaining pregnancy1. Generally amounts in up to one-half inch (2 cm) depth are considered excessive, and suitable for treatment with oxytocin. Amounts in excess of this depth are considered to be more likely to respond favourably to lavage with subsequent oxytocin treatment, and if present pre-breeding, the resulting exudate should also be evaluated for inflammatory cells and bacteria as a uterine infection may be the cause. If the fluid is seen to be a clear black colour per ultrasound, it is most commonly sterile. If however it appears echoic then the presence of infectious material should be considered a possibility.

One popular post-breeding treatment combination used in the past to assist in clearing uterine fluid, which while widely used has more recently been modified, was intramuscular oxytocin use when breeding a mare combined with an intra-uterine infusion of a broad-spectrum antibiotic.2. With rising concerns about the over-use of non-targeted antibiotics producing increasing numbers of resistant pathogens, we and others have stopped using post-breeding antibiotic lavages in the combination unless indicated by identification of a sensitive pathogenic presence in the uterus3 and have not noted a reduction in pregnancy rates. As the half-life of oxytocin in the mare is only 6.8 minutes4, we have noted that multiple treatments with oxytocin are required. The first intramuscular or intravenous injection of oxytocin (see below for dosage discussion) should be at around 4 hours after breeding, which allows adequate time for all sufficiently progressively motile sperm to make their way to the oviducts (which are not affected by oxytocin use when breeding a mare). Some prefer to start the treatment sooner, and realistically by 2 hours after breeding, most sperm that are going there will have reached and be in the oviducts. If uterine lavage is to be used it can be performed using saline or Lactated Ringer’s Solution and then be followed by oxytocin. In lesser-amount fluid situations or if being used prophylactically, three more intramuscular or intravenous injections of oxytocin at six hourly intervals (the first of which takes place 6 hours after the uterine lavage and initial oxytocin injection) will often prove adequate. Note that oxytocin treatment commences post-breeding and not post-ovulation. In highly susceptible mares, we have found it beneficial to monitor the mare using ultrasound and continue oxytocin treatment on a six-hourly treatment schedule through to 3½ days post-ovulation. If indicated, we will repeat the uterine lavage up to and including the day after ovulation, or in more severe (and rarely) 2 days post-ovulation. Treatment after 3½ days post-ovulation will not be beneficial, as the cervix will have closed sufficiently to prevent clearance of fluid.

If uterine fluid is identified pre-breeding, the same parameters should be observed. Up to a depth of 2 cm, oxytocin alone is typically adequate to assist clearance. With fluid depths greater than 2 cm, uterine lavage coupled with the use of the oxytocin protocol will be more likely to prove beneficial. With high-risk mares manifesting uterine fluid upon entry to estrus, it is not uncommon that we commence the oxytocin protocol at the onset and keep treatment up through to 3½ days post-ovulation – the treatment being on a six-hourly rotation. For convenience, we use a 6 am, midday, 6 pm, midnight rotation, but that can be modified to be convenient for the user. The timing should however be manipulated so that oxytocin is given no less than 2 hours prior to breeding, nor 2 hours – and preferably 4 hours – post-breeding in order to avoid interfering with sperm transport.

In the past a suitable dosage level of oxytocin use when breeding a mare was considered to be 40 international units (i.u.) or more. Research5 has suggested a lower dose – 10 i.u. intravenously or 20 i.u. intramuscularly – to be more suitable prior to ovulation. The research indicated that the higher dosages result in a universal constriction – a tetanic clamp-down – of the smooth muscle, whereas the lower dosage results in methodical contractions starting at the distal (cranial) portion of the horns working caudally towards the cervix, which results in a more complete and systematic evacuation of the fluid. Injections can be either intramuscular or intravenous, and after treatment with 20 IU, it has been shown6 that >90% of intrauterine content is eliminated within 15 to 30 minutes. Once ovulation has occurred, the effect of oxytocin is reduced7, so increasing the dosage to 20 i.u. intravenously or 25 i.u. intramuscularly may be appropriate. This dosage however should not be exceeded in order to avoid the possibility of the tetanic contractions.8

Some users of this protocol may favour the use of the synthetic prostaglandin analogue Cloprostenol (Estrumate™, Intervet), rather than oxytocin owing to it having a longer half-life (active period) than oxytocin. Additionally, intramuscular rather than intravenous use has been suggested as resulting in a slower, longer duration of action. Research on the use of prostaglandin analogues at the post-ovulatory stage however has indicated that there may be an interference with the development of a fully functional Corpus Luteum9, 10, 11, and its use is therefore not recommended beyond 12 hours after ovulation12. Other researchers have suggested that progesterone secretion of the CL is only temporarily affected and rebounds by day-7 post ovulation if the synthetic prostaglandin treatment is carried out over only the first 48 hours post-ovulation and at a lower dosage (250 micrograms IM)11. As a matter of convenience, up to 12 hours post-ovulation, we may use either “Biorelease” oxytocin (BET Pharm, Lexington, KY, USA) or Cloprostenol for the evening treatment to provide up to a 12 hour coverage, thereby preventing the need for middle-of-the-night treatments. With the latter hormone, this is a happy compromise between practicality and not risking compromise of CL function. “Biorelease” oxytocin can be used without concern about interfering with CL function, and can consequently be used after the 12 hour limit of Cloprostenol if available. As oxytocin, prostaglandin and Cloprostenol are all produced in thin liquids, and a low volume is being injected, insulin syringes may be used, which causes minimal distress to the mare or the person performing the injection.

Mares that are likely to benefit from the use of an oxytocin protocol such as one outlined above include those with known delayed uterine clearance problems, mares with uterine fluid presence pre- and/or post-breeding, older mares that may have uterine lymphatic issues, mares post-breeding with frozen semen, and – in our experience – some other “problem mares” that have defied pregnancy establishment for no apparent reason. It should be noted that we will use oxytocin prophylactically in mares that we consider may present breeding problems even in the absence of identified problems (including fluid), and have seen good – if inexplicable – success. The treatment is cheap, easy and carries minimal risks.

A related point worthy of serious consideration has been raised. Some of the above-mentioned research has established that the presence of systemic low levels of prostaglandin post-ovulation interferes with CL formation. This can then have a negative impact on subsequent progesterone release. There is an increasing belief among some researchers that low progesterone levels in the mare may be present because of low-grade endometritis causing low levels of prostaglandin to be released. This endometritis may be as a result of either undetected uterine pathogenic presence (that should have been identified in a pre-breeding uterine culture and cytology evaluation), or delayed uterine clearance issues causing failure of clearance of normal post-breeding inflammatory response fluids and a sub-clinical endometritis. If this is the case, it may well be that money would be better spent on pre- peri- and post-breeding evaluations and suitable treatments including oxytocin use when breeding a mare, rather than the excessive progestin supplementation commonly seen!

One important point is that if during the pre- or post-breeding evaluations the cervix is found to be tight, treating the mare with systemic Estradiol Cypionate (ECP) and/or topically applying Buscopan or a cream made with the prostaglandin E product Misoprostol to the cervix is also indicated. Failure of the cervix to relax can be a significant contributor to retention of uterine fluid. Note that higher dosage rates of estradiol prior to ovulation should be carried out with caution as this may delay ovulation.  Additionally, only a single use of Misoprostol is recommended per estrus.

© 2000, 2002, 2004, 2005 and 2021 Equine-Reproduction.com, LLC
Use of article permitted only upon receipt of required permission and with necessary accreditation.
Please contact us for further details of article use requirements.
Other conditions may apply.