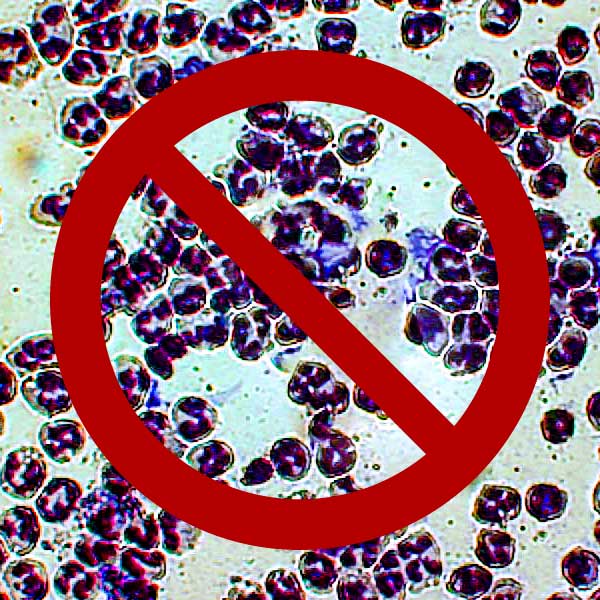 Why Perform a Cytology Smear in Conjunction with a Uterine Culture?

– The importance of uterine cytology evaluation supporting the culture results is explained.

Most stallion owners require a “clean uterine culture” from a mare prior to breeding her live cover or in some cases shipping semen to her; many mare owners also reference the same need for their mare. It is well known however, that the results of an endometrial swab culture alone are, at best, not a reliable indicator of uterine pathogenicity, and at worst a false positive may result unnecessary treatment and disastrous consequences. The importance of uterine cytology evaluation supporting the culture results is explained here.

An Internet poll carried out in 1999 on the largest non-professional equine reproduction e-mail discussion group1 indicated that of the approximately 200 respondents, at that time only about 50% of veterinarians routinely performed a cytology smear in conjunction with an endometrial swab culture.

Following the response to the e-mail discussion group poll, we wrote this article in 2003 and added a poll to which readers could respond, indicating if their veterinarian routinely performed a cytology smear in conjunction with a swab culture. After 850 responses, in 2021 we closed the poll, with the final results showing that 67.41% of respondent’s veterinarians did not routinely perform a cytology smear.

This means that there are still a large number of breeders who may be operating under a mistaken belief that their mares are either “clean” when they are not, or who are treating a uterine infection that isn’t really there! The importance of uterine cytology is critical!

What is a cytology smear and what is its significance?

A microscope slide smear of some of the fluid and surface tissue harvested from the endometrial surface of the uterus is prepared and then stained using a differential hematology stain. The slide is evaluated for the presence or absence of inflammatory cells, specifically neutrophils. 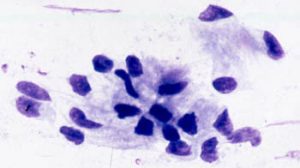 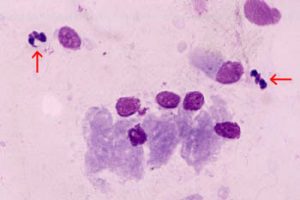 The combination of endometrial cytology smear and culture results offers the simplest, cheapest and most accurate diagnostic tool connected with uterine swabbing and pathogenicity (although an endometrial biopsy and culture is more accurate, but is not necessarily cost-effective in all cases). To understand this better, one must consider the various result possibilities: 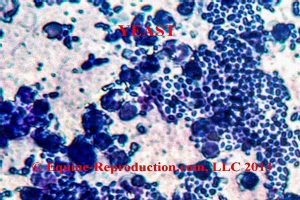 The small “bunches of grapes” are yeast cells!

It has been suggested that if no neutrophils are identified on a cytology smear, it is not necessary to perform a culture of the sample, and the mare may be considered “clean”. Similarly, research has reported a correlation between smears which were considered indicative of inflammation, having an average of one or more neutrophils per x1000 magnification in 10 fields and mares which had a positive culture result2. When originally researching details for this article, it was indicated to me that Pseudomonas aeruginosa may be identified in culture, but with an absence of neutrophils. If this occurs, it may indicate the presence of the pathogen in a commensal state, which will not develop into an active infection until something triggers the occurrence3. That something may be a suppression of the mare’s uterine immune system as a result of elevated progesterone levels resulting from pregnancy. In a similar situation, it has been noted that a smear which has an absence of neutrophils, but a large amount of “detritus” – small non-cellular material – is often positively correlated to a mare which produces a growth of E-coli on culture of that swab. Both of these bacteria are potent producers of biofilm, which may result in a “protective layer” for the bacteria, causing an absence of inflammatory recognition on the part of the mare, and hence an absence of neutrophils. It is therefore suggested that in some cases, a culture growth should still be completed regardless of this absence of neutrophils. The incidence of Pseudomonas aeruginosa is low, however it is sexually transmissible, so from a live cover stallion perspective there is still value in the culture. E-coli is commonly found in fecal material and may therefore be associated with either contamination of the sample or of the uterus (with potential for pathogenic growth). If a slide shows a “dirty smear” with a lot of detritus, we will always culture.

If neutrophils are present on the slide, but there is an absence of pathogen growth on the culture, this indicates that there is something irritating the uterus, and it is most likely that it is a pathogen that was missed during sampling, so further diagnostics are required.

A useful adjunct sometimes experienced is that yeast or fungal presence may be identifiable with the stained cytology smear slide, but would be unlikely to grow on a bacterial culture. It can take a longer duration to produce yeast or fungal growth than a bacterial culture is usually grown for, so such pathogens might be missed on culture, but identified on a smear, once again showing the importance of uterine cytology evaluation.

Collection of a surface sample of the endometrial lining of the uterus with the double-guarded endometrial swab is a common and simple method of sampling, but use of a cytology brush has been shown to carry more accuracy in sampling and subsequent results4. Other research has indicated that in mares considered barren or subfertile, a low volume (60-ml) uterine flush with phosphate buffered saline, introduced via a trans-cervical balloon catheter in order that the majority of the introduced fluid may subsequently be recovered yields a more accurate harvesting method yet to indicate both cytological and bacterial results5. A portion of the recovered fluid is concentrated by centrifugation, and after removal of the supernatant and resuspension of the resultant pellet in a lower volume of liquid; a culture is prepared of the harvested matter. The centrifugation is performed to enable a concentrated growth to become apparent, should an organism be present. A cytology smear is prepared using a sample taken from the non-centrifuged portion of the recovered fluid. Preparation using the centrifuged portion would reveal distorted cells that could make interpretation of the results difficult. A practical approach for using this more complicated sampling method rather than the double guarded swab and cytology brush, would be to use it only on those mares that have previously proven themselves to be subfertile, or where a previous sample using a guarded swab has resulted in an absence of a pathogen in culture, but the presence of neutrophils in the cytology smear.

The fact that sampling, preparation and reading a cytology smear is achieved so quickly and cheaply carries the potential for additional advantages. It takes only about 15 minutes to complete the process and have a result. This can be beneficial if one needs to breed a mare who has given no warning of being ready, thereby not allowing time for the results of a uterine culture to be returned (typically about 48 hours). Taking into account the risk associated with the rare instances of the non-inflammatory-producing pathogens Pseudomonas aeruginosa and E-coli, one may elect to gamble and breed based solely upon a “clear” cytology result.

If one is breeding a large number of one’s own mares, it can be far cheaper and more expedient to perform only a cytology smear on the first (or even second) round of breeding. Statistically, around 60% of mares will become pregnant on the first cycle (presuming decent quality semen of course), so if one were breeding 100 mares, a huge amount of money, time and energy would be wasted performing culture and cytology on all of those mares. Some large farms elect to breed without checking on the first cycle, perform a cytology smear on the second cycle (and breed or treat as is appropriate based upon the results) and then only on the next cycle go “the whole hog” and perform more in-depth diagnostics on open mares such as a low-volume lavage or even a biopsy.

In the worst case scenario, a mare with a clean uterus has an endometrial swab performed, which is then subjected to a culture but not a cytology smear. The result is returned as being “positive” for a pathogen, and intra-uterine antibiotic therapy is initiated even though there is actually no pathogen present in the uterus and the diagnosis is erroneous. When one introduces an antibiotic into the uterus, one must consider the possibility of the creation of a “superinfection” where an opportunistic organism – Pseudomonas aeruginosa and yeasts are two such – becomes active. A similar situation is seen in human females who are placed on an antibiotic and subsequently develop a vaginal yeast infection. In the equine, the opportunistic organisms such as those named can be extremely difficult to eradicate, and may lead to permanent damage to the endometrium resulting in alteration of the endometrial biopsy score, and a lowered chance of the mare subsequently producing a live foal.

The importance of uterine cytology – Summary:

If a cytology smear is not prepared in conjunction with the culture of the swab sample, then the results of the culture as far as showing true pathogenic status of the uterus are WORTHLESS!!!! If a “positive culture” result is returned, were no neutrophils were seen on a cytology smear, with the exception of the potent biofilm producers Psuedomonas aeruginosa and E-coli, it is most likely that the culture result is indicative of a contaminated sample. Similarly, if there is an absence of growth on culture, but neutrophil presence on cytology, something is irritating the uterus, but is has not yet been identified. So – no cytology, no accuracy – we cannot emphasise the importance of uterine cytology enough!

© 2003, updated 2021 Equine-Reproduction.com, LLC
Use of article permitted only upon receipt of required permission and with necessary accreditation.
Please contact us for further details of article use requirements.
Other conditions may apply.