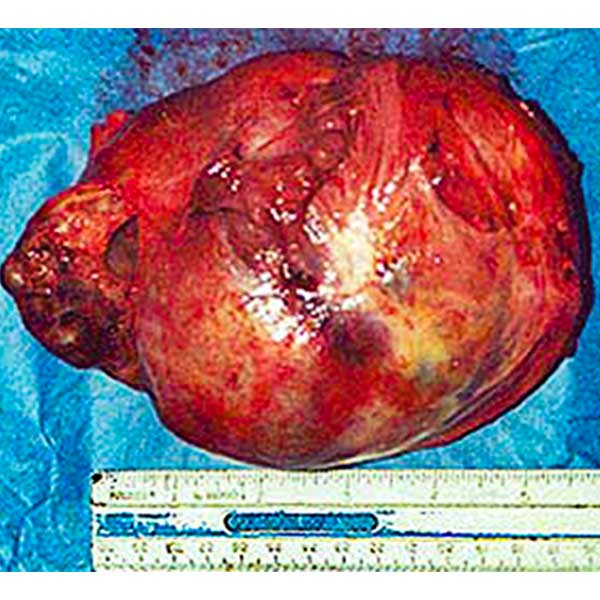 – Capable of affecting reproductive ability and overall disposition, the GCT is one of the most common ovarian tumors to be found in the mare. 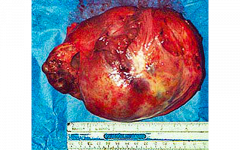 Granulosa Cell Tumor – GCT, with a ruler indicating its size – ovary is at far left, the rest is the tumor

Granulosa cell tumors – GCT – or granulosa-thecal cell tumors are one of the most common ovarian tumors to be found in equines. They are usually benign steroid-producing tumors that may grow very large. Often they are initially identified during a routine reproductive examination of the mare when one ovary is found to be excessively larger than the other. The tumor shown here is six inches in length (the smaller attached object at the left end is the ovary), but larger examples are found. Typically the opposite ovary is found to be small and displaying no follicular activity.

A Granulosa Cell Tumor – GCT – may also be suspected if the mare’s attitude and disposition suddenly changes. For example she may become very "studdy", displaying stallion behaviors and postures – possibly becoming aggressive – and even starting to develop the typical stallion cresty neck and more masculine “voice”. In some cases, she may even start mounting other mares which are in estrus. This is probably as a result of the granulosa cell tumor secreting testosterone. This must not be confused with similar behavior which may be seen in the pregnant mare, which is as a result of steroidal secretion related to the pregnancy. GCTs are extremely rarely found during pregnancy. Alternatively, the non-pregnant mare may display continuous estrus ("nymphomania") or only very occasional or no estrus at all. 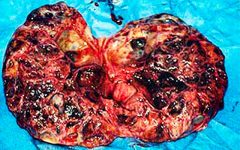 Conclusive diagnosis of a GCT can be difficult to achieve without the correct evaluation of multiple factors. Ultrasound, which may initially appear to be a sensible diagnostic tool to use, is frequently not of great assistance other than indicating that the affected ovary is of excessive size. This is because there are ovarian conditions other than GCTs that may present similarly per ultrasound, especially anovulatory hemorrhagic follicles. Combined blood-inhibin and testosterone assays have proven reliable for diagnosis of GCTs, however marginal results can again fail to be conclusive. Research which replicated work done earlier by the same team in 2011 confirmed another assay to have excellent reliability for identification of GCTs1. The research looked at the anti-Müllerian hormone (AMH) assay and compared it to the various assays for accuracy among 403 samples. It determined the AMH assay correctly identified 98% of affected mares, compared to only 80% for inhibin and 48% for testosterone assays. 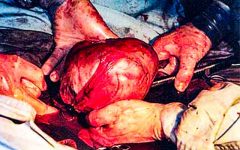 Granulosa Cell Tumor being removed through a flank incision

Treatment of granulosa cell tumors is typically achieved by removal of the affected ovary and associated tumor. A return to reproductive normality may be expected six to twelve months after surgery, with the mare being as reproductively sound as she was prior to the tumor. Removal can be carried out trans-vaginally or through a flank incision (as shown in the accompanying image) depending upon the size of the tumor and other circumstances. When cut in half, the GCT exhibits a definitive "honeycomb" pattern on the interior, as seen in the image above. This can create a mistaken appearance similar to an anovulatory hemorrhagic follicle when viewed by ultrasound – or conversely, an AHF may be mistaken for a GCT – hence the importance of confirming diagnosis with a suitable assay before performing radical surgery!

All photos on this page courtesy of Terry Ready of Oakwood Quarter Horses, the attending anesthesiologist for the surgery.

© 2000, updated 2021 Equine-Reproduction.com, LLC
Use of article permitted only upon receipt of required permission and with necessary accreditation.
Please contact us for further details of article use requirements.
Other conditions may apply.