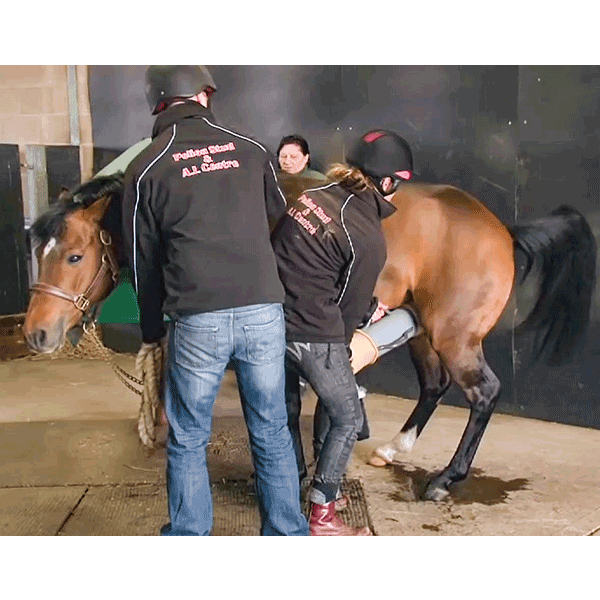 As there are a variety of methods to start a breeding stallion, both for collection and live cover, for the sake of this article, we’ll assume that nothing has been done with the stallion, i.e., he has not been bred live cover or artificially collected.

You would start by setting up whatever type of AV (artificial vagina) you plan on using. When collecting my stallion, I use the French style (INRA) AV as I’m most comfortable with that. Your vet may have recommendations of one that might work better for your particular situation, or you may have one that you personally prefer. There are several types available now, including the Colorado, Missouri, Brazilian (Botupharma) and the Roanoke. You will need to determine what your stallion’s preferences are with regards to pressure, temperature, type of AV, type of liner(s), lubricant, etc. Every stallion is a bit different, and there are indications that the stallion will give that things might not be to his liking. That will be something you will have to work with in order to determine what each stallion prefers. You may have to experiment a bit to get the AV to the stallion’s preferences.

When starting a young stallion to ground collect, I prefer using a mare that has been live covered and I know is very quiet and accepting of stallions. She should be in full heat and willing to stand for the stallion. Initially, you’re going to want to have at least three people to help you and a couple of extra hands can certainly be helpful. I also prefer that everyone that will be in the immediate vicinity of the collecting/breeding, is wearing a helmet.

I start teaching a stallion from the very beginning to behave as I would expect him to throughout the rest of his life. He must learn to stand quietly to be washed, he must behave, no lunging for the mare is accepted, kicking, biting, etc., and he must always be willing to respond to the handler(s). He is allowed to behave like a stallion, however, and is allowed to be vocal, as well as have contact with the mare.

If the stallion has a good, strong libido, you can often begin training them to ground collect immediately. However, some stallions will need to be allowed to mount the mare initially and then be directed into the AV the first few times. This will also allow the handler to learn what preferences the stallion may have with regards to the AV. Does it need to be hotter? Cooler? Tighter? etc. 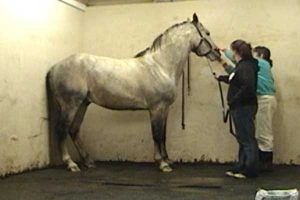 Once I know the stallion is accepting of the AV and we have settled on the particulars of how he prefers it to be setup, I will go on to the next step. We go through the usual procedures of prepping him and do things in the same manner. The stallion should, by now, know what is expected of him. We will again, have a mare in season to tease the stallion with. However, once he has attained a full erection, we will direct him into the AV while on the ground. If you have a teasing rail, this will help in keeping the stallion from “traveling” forward. I prefer for the first couple times, to have a couple of people at the stallion’s head as the stallion may tend to get “light” up front and want to mount something. While I won’t stop that behavior entirely the first couple of times, I definitely don’t want the stallion going all the way up. The handlers are also to keep the stallion from scrambling around, as well. A stallion that is allowed to move around or rear up makes it really difficult for the individual handling/holding the AV. If you have a wall with which to stand the stallion against, this can help in keeping the stallion somewhat stationary. Someone can place a hand on the stallion’s hip to keep him steady and from moving towards the AV handler too much. 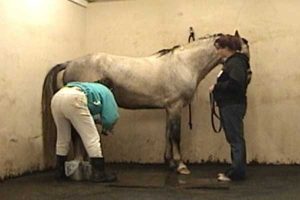 Penis washing procedures are carried out as per normal

Once he has been cleaned and prepped, if and only if he is fully erect and ready, do I slide the AV on him. I usually do this by standing next to his shoulder, facing towards his rear and holding the AV in front of me. I will then brace my knee against the end of the AV to allow the stallion something to thrust against. 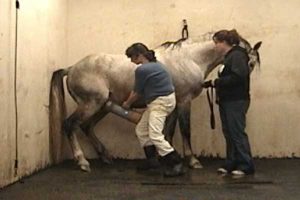 AV is introduced, and thrusting commences. Note bracing the AV against the knee with a vigorous thruster

You will need to brace against his thrusts as without at least some pressure, you are not going to be successful. Be very conscious of the fact that the first couple of times, the stallion is going to want to go up. Some stallions are less inclined than others, but initially, you can expect the front feet come off the ground at least a little bit. I don’t allow more than 12 inches and the handlers should be apprised of that. Watch your toes as his hind feet will tend to creep forward. 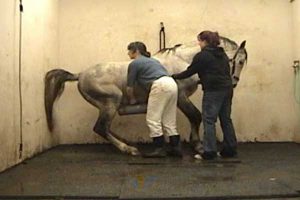 The first couple of times may seem rather intense, and you will get the idea of where you’ll need to “fine tune” your technique. Make sure you have someone that is strong enough to manage the front of the stallion, without encumbering his natural exuberance. Some stallions like to brace their chest against something while being collected. This can help in keeping them from “creeping” forward quite so much. Others will tend to want to lean on whoever is holding the AV. This can be rectified somewhat by having a person push on his haunches. You can also put the stallion in stocks once you have trained them to be collected on the ground. This allows them to lean on the bars of the stocks without putting any weight on the AV handler.

The first few times you attempt to collect, you may not be successful. If, after being prepped and you have attempted to collect him, he doesn’t ejaculate, put him away and try again in a few hours. Keep everything calm and matter of fact. Some stallions will take several days before they understand or adapt. Take your time, don’t stress and just keep trying.

We began using this method for an elderly stallion with hock and back problems some 17 years ago. It worked so well that with the advent of transported semen, it just seemed to make sense to continue this method for collecting stallions. We do not use a mare at all for collection any more and can literally collect anywhere, anytime, including at horse shows. There is little risk of injury to the stallion and once the stallion is trained, one person can do the entire collecting process. More recently we trained an aged (24) year old Quarter Horse stallion to ground collect. He had been a reluctant breeder of the AV on the phantom, but took to being collected with an AV on the ground like a duck takes to water, so retraining is not an issue!

With thanks to Avalon Equine for the use of their stallion Mannhattan in the photographs.

© 2002 Equine-Reproduction.com, LLC
Use of article permitted only upon receipt of required permission and with necessary accreditation.
Please contact us for further details of article use requirements.
Other conditions may apply.