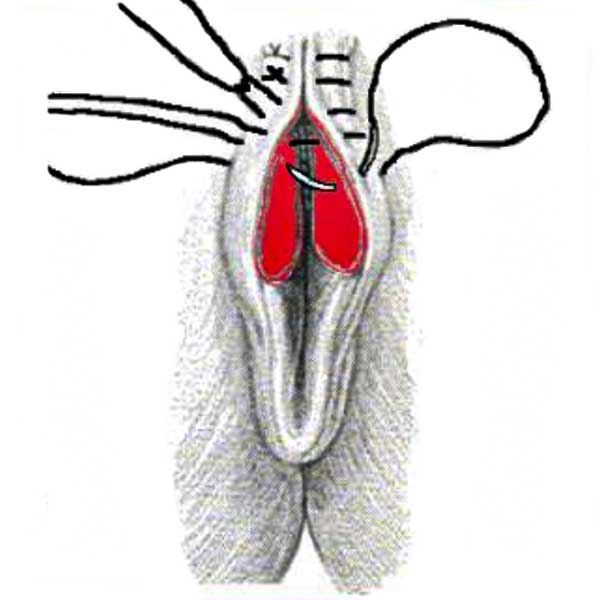 In the normal mare the vulva provides the first effective barrier to protect the uterus from ascending infection. The “normal” mare has three functional genital seals forming a barrier between the external environment and the uterine lumen:

During oestrus, the vulva and cervix relax, leaving the vulvo-vaginal constriction as the only seal. 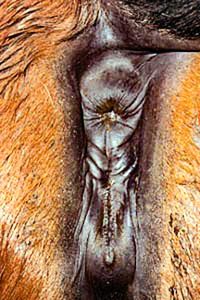 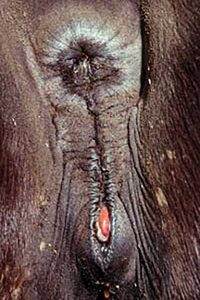 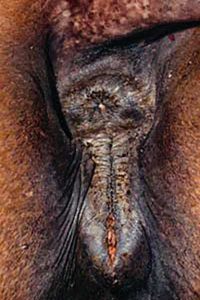 The vulval lips should be full and firm and meet evenly in the midline with 80% or more of the vulval opening below the brim of the pelvis (Figure One).

If the vulval seal is high (more than 4 cm of length dorsal to the pelvic floor) in relation to the pelvic brim, the vestibular seal is incompetent and aspiration of air (pneumovagina) and the aspiration of bacteria and contaminated material into the vagina can occur (Figures Two and Three). The abnormal vulval conformation is most prominent in Figure Three.

In Figure Two there is 6 cm of vulval length dorsal to the pelvic floor and the vulval lips are angled at 25 degrees to the vertical.

In Figure Three there is 6 cm of vulval length dorsal to the pelvic floor and the vulval lips are angled at 50 degrees to the vertical. 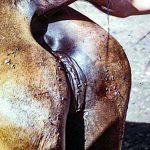 The significance of this conformation is that the normal vulval seal is compromised and there is the development of a pneumovagina and the aspiration of bacteria and contaminated The initial vaginitis may lead to cervicitis and acute endometritis resulting in subfertility. Contamination of the caudal reproductive tract with bacteria during pregnancy can result in embryonic death, and in late pregnancy can result in the development of placentitis and lead to abortion. Furthermore, the pneumovagina may lead to a urovagina (urine pooling within the vagina) when the vestibule and urethral opening are displaced cranially. 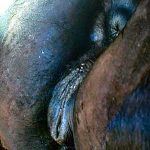 The more severe conformational abnormalities are more likely to result in failure of the vulval seal, and to increased faecal contamination since the vulva forms a shelf on to which faeces may collect. The vulval lips may be angled at 25 degrees (Figure Four) or even 50 degrees (Figure Five) to the vertical in these cases.

Dr Caslick (a French veterinarian) in the 1930’s first pointed out the importance of this condition in relation to genital infection in Thoroughbred mares. Interestingly, it is most commonly
found in Thoroughbreds, and, in the author’s experience, is almost unknown in Shires and native ponies.

Defective vulval conformation can be:

Older, pluriparous mares are more commonly affected with pneumovagina. However, young mares that are in work and have little body fat and/or poor vulval conformation, can also develop pneumovagina. 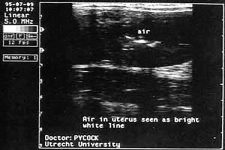 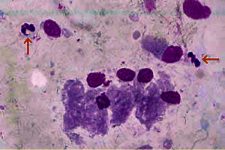 In some mares, pneumovagina may only occur during oestrus when the perineal tissues are more relaxed. Some mares make an obvious noise whilst walking, but in other mares the diagnosis may be more difficult. The presence of hyperemia and a frothy exudate in the anterior vagina on examination with a speculum is pathognomic. Rectal palpation of a ballooned vagina or uterus from which air can be expelled confirms the diagnosis. Real time ultrasound examination of the uterus may reveal the presence of air as hyperechoic (white) foci seen at the opposed lumenal surfaces (Figure Six). Cytological and histological examination of the endometrium may demonstrate significant numbers of neutrophils indicative of an endometritis (Figure Seven). Rarely eosinophils are also found in association with vaginal windsucking.

Treatment should be directed at correcting the cause of pneumovagina and concurrently treating the resulting acute endometritis. The former can be done surgically by Caslick’s operation although in some cases increasing the physical condition and fat status of the mare may be sufficient. This is the most common surgical procedure performed in studfarm practice, but in the author’s opinion some mares are subjected to Caslick’s operation unnecessarily. The operation should be reserved for mares with a true vulval defect rather than just because the mare has failed to become pregnant. 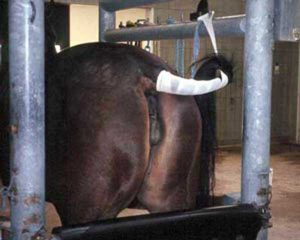 Fig. 8: Restraint and careful preparation of the mare. 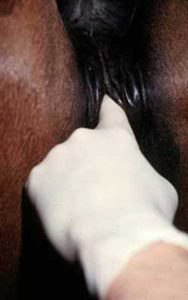 Fig. 9: The level of the pelvis floor is determined. 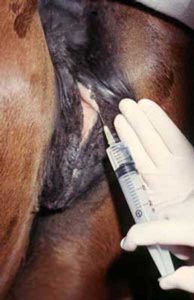 The mare should be suitably restrained ideally in a set of stocks, her tail bandaged and her vulva thoroughly cleaned and dried (Figure Eight). With a gloved hand, the level of the floor of the pelvis is determined (Figure Nine). This allows you to ascertain the level to which the dorsal commissure of the vulva must be sutured. Beginning at this level, the mucocutaneous junction of the vulva is infiltrated with local anaesthetic through a 21-gauge one-inch needle (Figure Ten).

It is important to use plenty of local anaesthetic and in many cases at least 25 ml will be needed. The local anaesthetic helps to evert the mucocutaneous junction. Both sides of the vulva are infiltrated in a stepwise fashion proceeding dorsally up to the dorsal commissure being sure that enough local is put right at the dorsal extent of the vulva. For mares operated on previously it is important to infiltrate deeply. This can be difficult due to the considerable amount of scar tissue often present in mares which have had repeated Caslick operations.

Fig. 11: Removal of a very narrow strip of mucosa. 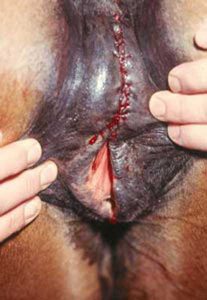 Fig. 12: The submucosal tissues are sutured together. 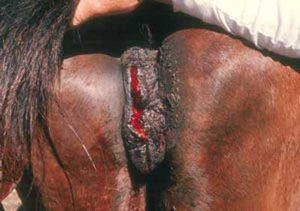 Fig.13: Vulva of a mare with a second degree perineal laceration.

Using rat-toothed forceps and scissors a very narrow (no more than 4 mm) strip of mucosa from the anaesthetized area (Figure Eleven). For older mares that have had the operation performed several times, more radical dissection may be necessary before healthy (bleeding) tissue is reached. In some cases, where there is not much vulval mucosa remaining, it is best to just “freshen up” the junction with a scalpel blade to get bleeding and not actually remove any further tissue. It is very important not to remove too much vulval tissue otherwise, with repeated opening and closing, there can be significant loss of vulval tissue. Eventually it becomes impossible to obtain effective closure of the vulva in extreme cases. The exposed submucosal tissues are sutured together using:

The suture material may be permanent or absorbable. The gauge of the suture material should not be too thick as this encourages faecal material to attach to the sutures. Skin staplers can be used, but the author found no time advantage over conventional suture techniques and it was harder to obtain a good alignment. Antibiotics are not given, but tetanus prophylaxis is needed if the mare is not vaccinated.

The aim of the operation is to reduce the vulval aperture and so prevent pneumovagina and faecal contamination of the vestibule.

The time of suture removal is not crucial and is normally done approximately two weeks after surgery. However, the vulva must be re-opened by performing an episiotomy before the next foaling otherwise major damage can result (Figure Thirteen). This mare had been “Caslicked” the previous breeding season and foaled unexpectedly. On examination ten hours after parturition she was found to have a serious second degree perineal laceration.

When should these injuries be repaired?

How would you repair this tear?

A careful examination of the area should be made to assess that no cervical damage has occurred; that the rectal mucosa is intact and whether the extent, amount of bruising, future contamination and/or infection may delay primary healing if a repair is effected. Should bruising be too extensive, then repair should be delayed for seven to ten days. If the degree of injury is severe, the wound may need to granulate before repair. This is governed by the degree of angulation of the vulva and pneumovagina which may develop in the interim. If the mare is likely to develop a serious pneumovagina, repair should be effected immediately even though the eventual healing may be need a second repair. It is important to make this clear to the mare owner or stud farm manager. If assessment indicates a poor immediate surgical risk, surgery should be postponed for seven to ten days. However the external view as shown in Figure Twelve would indicate the likelihood that there is minimal trauma and an immediate repair could be contemplated.

Repair Procedure: The mare should be sedated after being placed in a set of stocks, preferably, or over the stable door or several bales of straw (less satisfactory). Where a second degree tear is extensive, an epidural or local infiltration to the full depth of the tear can be used. Thoroughly clean and surgically prepare the surgical area, Surgically debride all severely bruised tissues, tissue strands which will be non-viable and tie off any new points of haemorrhage. Wherever possible, freshen tissues slightly to ensure all bruised tissues are removed before suturing. Repair can be made using single deep vertical mattress sutures of synthetic monofilament suture material. These sutures should be placed to close the injured area, bring the vaginal mucosa back into apposition and close the dead space between the vagina and the skin tear. A continuous lock stitch can then be used as a skin suture; if there is a risk of dehiscence, then single interrupted skin sutures would be preferable.

Mares that require natural mating subsequently may also need to have an episiotomy performed if “tightly stitched”. If not the vulva may rip and/or injury to the stallion’s penis may occur. The episiotomy wound should be repaired soon after foaling or mating to prevent pneumovagina. 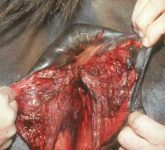 Fig. 14: Vulva of a mare with a third degree perineal laceration.

If there has been severe trauma to the vulva at foaling (Figure Fourteen), it may be necessary to wait for the tissue swelling to subside before attempting repair. This mare was a 3-year-old Warmblood mare which had foaled her first foal and, due to a head and leg displacement, presented thirty minutes after parturition with a severe third degree perineal laceration. Due to the severe bruising and laceration present, repair should be delayed until granulation of the area occurs. This can be within six to eight weeks, but in practice, repair is often delayed until after weaning in the autumn. Immediate care consists of careful checking for bleeding from the traumatised tissue and removal of devitalised tissue. Appropriate antibiotic and anti-inflammatory therapy should be instituted and tetanus prophylaxis given if necessary.

If repeated episiotomy followed by closure is not done very carefully, there can be considerable loss of vulval tissue, poor healing and major problems for the mare.

When the angle of the vulval surface relative to the vertical is the primary defect, Caslick’s operation is often ineffective, and perineal resection should be used to achieve a satisfactory vulval conformation. Caslick’s operation has no positive effect on urovagina.