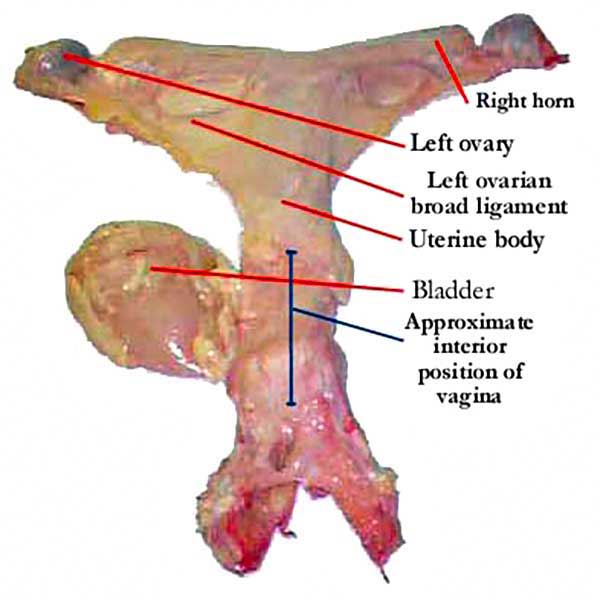 – Here we show the gross aspects of a mare reproductive tract dissected with labels and explanations. 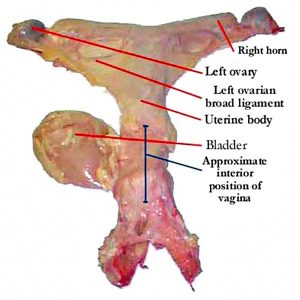 This is a view of a mare reproductive tract dissected, from above and behind 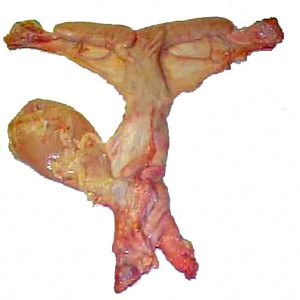 This is a view of the same mare reproductive tract dissected, this time from below. Here the urethral connection of the bladder can be seen clearly (the bladder is again displaced to the left), and the body and horns of the uterus are more clearly differentiated from the broad ligament. 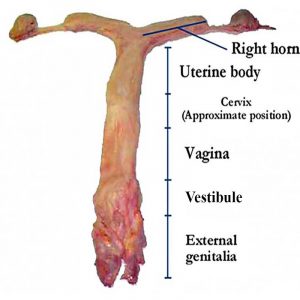 In this image, the bladder, fat and broad ligament have been stripped away, clearly revealing the uterine body and horns. 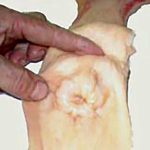 The caudal aspect (back end) of the cervix protrudes into the vagina and is often described as having an appearance and feel of a “small volcano”. There is a depression in the center, which is the opening to the uterus. It is through this opening that the stallion’s penis (which will usually penetrate into and even through the cervix during live cover) will pass, or in the case of insemination, the pipette. When guiding the pipette during AI, it is not usually necessary to place the guiding finger in further than one’s first knuckle joint. The cervix is a remarkable structure, with an “accordion-like” design. This allows expansion at the time of foaling, when a large object – the foal – has to pass through a small opening – the cervix! 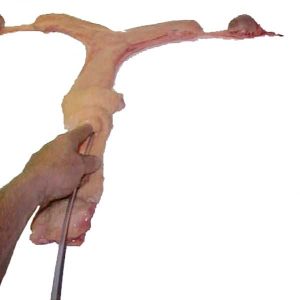 The ovary itself is an average of 3-5 cm in length and roughly kidney-shaped. The indentation in the center of the lower side being the “ovulation fossa”, where the oocyte evacuated from the follicle (which “implodes” rather than “explodes” upon ovulation), exits on its way to the oviduct after ovulation. The follicle shown here outlined in red on the left side of the image is small at a little over 1 cm in diameter. The size is measured from the outer surface to the innermost extent (in this image therefore, from left to right) and top to bottom, with the two measurements averaged. Given this averaging requirement, ultrasound is the only accurate method for establishing follicular size. 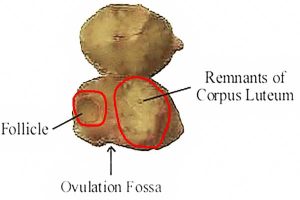 The sectioned equine ovary, showing at left, a follicle and at right the lighter coloured luteal tissue

Determination of follicular size by rectal palpation relies on the assumption that the follicle is spherical in shape. Although this is often the case, it is not always so. Even if the follicle is spherical, it is difficult to determine the exact edge when using palpation. On the other hand, rectal palpation is of value in many cases to determine how close to ovulation the mare is, as the consistency of the follicle typically softens dramatically very close to ovulation, and this can be established using palpation with greater touch sensation. Ultrasound may detect either a “tear-shaping”; or a thickening of the outer membrane of the follicle, both signs of impending ovulation, but these signs are not always present. Circled in red to the right of the image can be seen an area of luteal tissue lighter in colour than the surrounding ovarian tissue. This is the Corpus Luteum, or CL. This structure forms after ovulation, filling the evacuated space where the follicle was located. The luteal tissue secreted progesterone, which is responsible for early pregnancy maintenance and diestrus behaviour. If the mare is not pregnant, the CL is subsequently lysed by the prostaglandin F2α released from the uterus, allowing a return to estrus. The luteal tissue may remain visible as a more echoic area on the ovary for several subsequent cycles, but is non-functional. 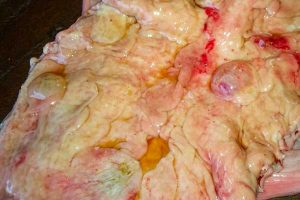 This endometrium shows multiple cysts – some pedunculated and some embedded within the endometrium.

“Uterine cysts” – a collective term – may take the form of those found embedded in the endometrium (typically “glandular cysts”) or expanding into the uterus, possibly pedunculated. Cysts in themselves are rarely an issue, however they may be harbingers of other endometrial and uterine changes which can reduce pregnancy rates. If a cyst is located close enough to the cervix to interfere with closure, or there are multiple cysts in the region of the corpus-cornual junction, they may present problems with pregnancy maintenance. Rarely, large cysts may interfere with early embryonic movement throughout the uterus which could threaten pregnancy maintenance at the time of maternal recognition (~8-12 days), however to interfere with such movement, the cysts would need to be large or numerous enough to occlude almost the entire uterine body or horn. 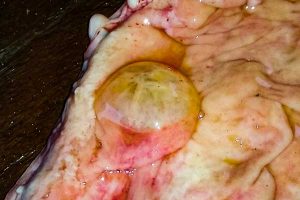 Although in most cases they may present minimal risk to pregnancy, cysts can cause confusion at the time of the 12-16 day pregnancy check. As they are fluid-filled, in particular the pedunculated cyst which has minimal attachment but is mostly within the lumen of the uterus may be easily mistaken for an early pregnancy. There is no way to determine the difference between a cyst and a pregnancy at this stage (some may suggested that a small white area found at the top and sometimes the bottom of the round black object visible on the ultrasound screen indicates it to be a pregnancy, but that white area doesn’t actually exist, and is merely an artifact of ultrasonography called a “spectral reflection”). It is therefore recommended to not only map and record the size and position of any uterine cysts visible per ultrasound before breeding, but also to repeat any questionable ultrasound several days later, as a pregnancy will increase in diameter, whereas a cyst will not!

© 1999, 2021 Equine-Reproduction.com, LLC
Use of article permitted only upon receipt of required permission and with necessary accreditation.
Please contact us for further details of article use requirements.
Other conditions may apply.