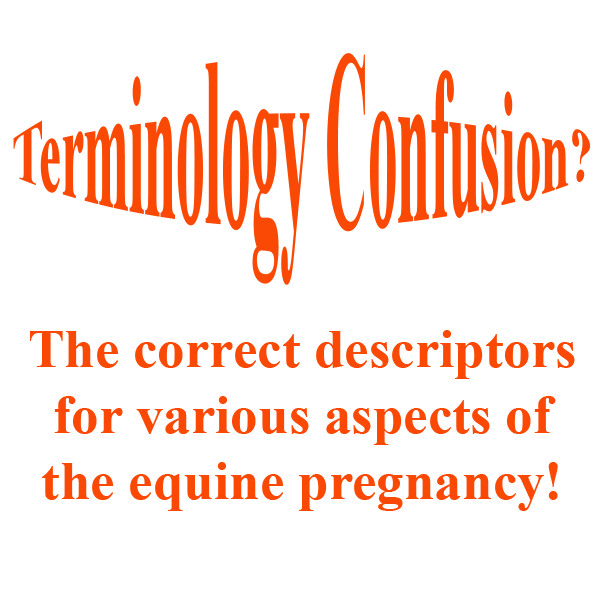 – Conceptus? Embryo? Fetus? Abortion? Stillbirth? Premature? So many terms – a little light offered here in so much confusion!

There are different terms to describe the developing foal in utero. Furthermore, certain terms are used to describe the foal when it is delivered in an abnormal condition or at the wrong time of gestation. These terms can be confusing and are often improperly applied. It is important to use the correct terms because their use allows for better communication and helps categorize the process causing the problem, allowing certain conditions to be considered as possible etiologies and others discarded. 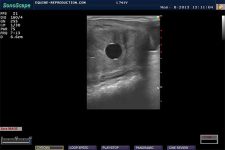 Following fertilization of the ovum, the early developing foal is referred to as a conceptus (the tissues destined to become the embryo and placental membranes) or an embryo. The term embryo can refer to the entire conceptus, or to the portion that forms the foal. The end of the embryo stage is somewhat arbitrary. Some authors use the end of organogenesis to signal the transition from the embryo to the fetus. Others prefer to classify based on when external taxonomic features become identifiable (the single digit in horses). Even using these criteria, the time point is not clear-cut. Completion of organogenesis has been proposed to be by day 23 of gestation by some and day 30 by others. External feature development allowing classification is anywhere from day 38 to 60. In general, a conceptus prior to day 40 is referred to as an embryo, and after day 40 as a fetus. The offspring remains a fetus until delivery, becoming a foal upon birth at the end of gestation. An equine fetus near the completion of gestation is sometimes referred to as a term fetus.

Premature interruption of gestation with loss of the offspring is a relatively common occurrence. In women it is referred to as miscarriage or preterm birth, and in animals it is called abortion. Abortion in horses is subdivided by time of occurrence. At the beginning of gestation it is referred to as early embryonic loss, and during the fetal stage it is called an abortion. Most pregnancy losses in mares occur as early embryonic losses. Abortions are also called stillbirths. Technically, delivery of a dead offspring at any time of gestation is a stillbirth; however, the term is usually reserved for delivery of a non-viable offspring after the time when viability outside the reproductive tract is possible. In humans this is usually after 24 weeks of gestation (prior to 20 weeks is termed a miscarriage). Using these criteria, loss in a mare after about 310 to 320 days would be a stillbirth. Although there is obvious overlap, it is useful to think of loss of a term fetus as a stillbirth, reserving abortion for earlier losses. This allows a different set of causes to be considered in a stillbirth, many related to the delivery or birthing process. By contrast, abortions are often caused by conditions affecting the membranes, such as placentitis or torsion of the umbilical cord.

While premature describes foals born early, there are several terms used to describe live, but abnormal, foals born beyond their expected delivery date. Some of these foals are small and appear premature. These are dysmature foals. Dysmaturity is commonly associated with placental insufficiency. Foals with extended gestation that are normal to large in skeletal size but thin are called postmature. The classical cause of postmaturity is consumption of endophyte-infected fescue grass by the mare. Each of these conditions has distinct clinical characteristics and requires special medical treatment.

Original on-line version and other interesting material may be viewed in the Equine Disease Quarterly,
a printed and on-line periodical produced by the Gluck Equine Research Center