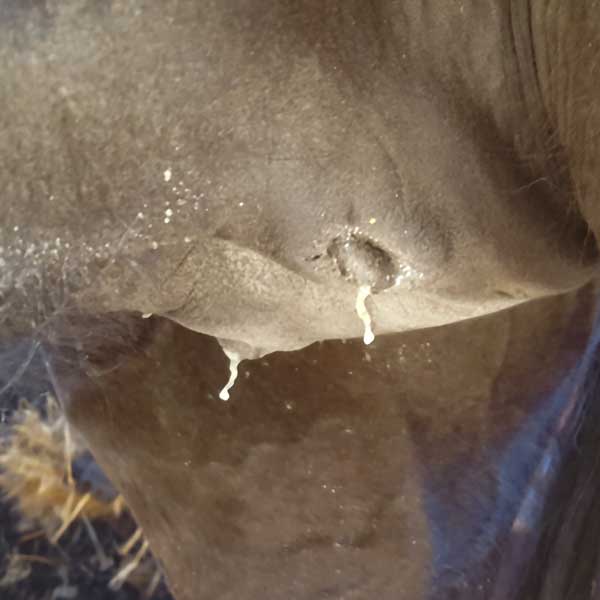 – A description of some of the most reliable and simple methods of predicting foaling – as well as less reliable techniques! 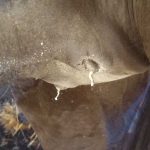 There are of course many signs of the approach of birth in the mare: “Softening” of the tail head and vulva; an increase in the size of the udder; an overall change in the mare’s body shape; sometimes a change in disposition; and “waxing” – the build up of wax-like droplets on the end of the mare’s teats. This last signal is probably one of the most misguidedly used! Often I hear it said “my mare waxed up last night, she’s probably going to foal tonight or tomorrow”, and with that the mare owner goes out to the barn to check the mare yet again, but may yet be plagued by many restless nights! The sad truth about “waxing” is that it may happen as much as a month before the mare foals, although up to two weeks is more common. Either way, it’s not a very reliable sign! So what are some simple methods for predicting foaling?

The best “non-laboratory” indicator I have found yet consists of the inspection of a few drops of the mare’s milk once a day. I always attempt to carry out this process at about the same time each evening – usually feed time. Milk out a drop or two from the mare onto a black plastic surface (you really do only need a drop or two!). A watch strap was suggested to me originally, but I have found that the black plastic top of a 35 mm photographic film container or something similar works even better.

Well prior to parturition, the exudate will appear slightly white or yellowy, and one is easily able to see the black plastic below through the liquid. Within the 24 hours prior to the mare giving birth, the liquid will become almost opaque, and it will be very hard to see the black plastic. You may well also notice what appear to be large white granules in the liquid. It will probably take at least one foaling to be able to identify the difference, but once you’ve seen it, there’s no mistaking it!

Milk evaluation at 331 days of gestation, the day of foaling, shows 400 ppm calcium and a very slight drop to a pH level of 6.4

From a medical point of view – the difference in the consistency and taste is as a result of a change in the electrolyte levels in the liquid. Close to term, calcium and potassium levels increase, and sodium levels drop. These can be identified with the used of stall-side assays or even the use of “swimming pool strips”, which are easily available and the latter easy and quick to use. Neither however are as rapid or simple as the “black plastic” or “taste test” tricks! Incidentally if induction of parturition is contemplated, recognition of this electrolyte change is an important part of determining if a successful outcome for the foal is likely following induction. I would not recommend that induction be carried out without such a check, and the finding of acceptable levels, as well as a number of other items that must be in place or checked, also with acceptable results.

Note: There are no such things as absolutes in horse breeding! It is therefore imperative to recognise that although any of the above techniques may be a useful indicator, they will not be present in all pre-foaling mares. It is also worthy of note that with some mares the changes will occur within 24 hours of foaling – in other words, if you see a change in the milk as noted, the mare is going to foal within the subsequent 24 hours, but that may mean she foals as little as a few hours after the change is noted! And then there are always exceptions, where no change is seen, or rare instances where the change may precede foaling by as much as 2 or 3 days. It is also important to be aware that in cases of placentitis, milk changes become very unreliable predictors of impending foaling. So although these are simple methods for predicting foaling  under normal circumstances, they are not an absolute, only a rough guide!

© 1999, 2020 Equine-Reproduction.com, LLC
Use of article permitted only upon receipt of required permission and with necessary accreditation.
Please contact us for further details of article use requirements.
Other conditions may apply.