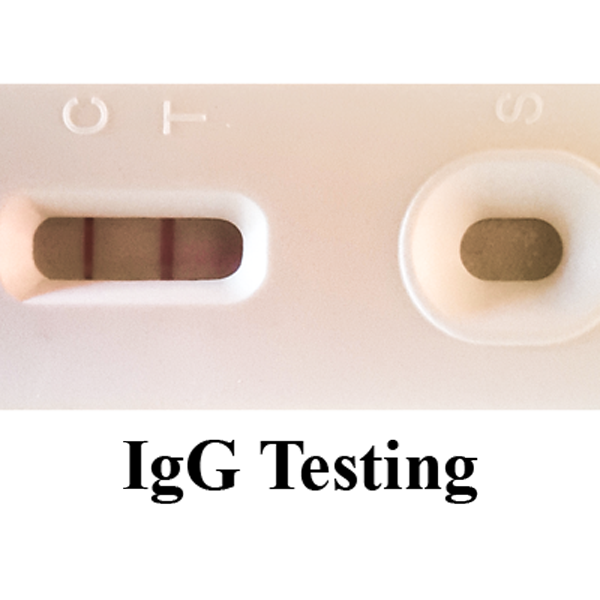 – low IgG – can lead to potentially fatal complications, but is easily managed in most with testing and supplementation

Foals are born with little or no immunity to infection from outside organisms. There is a minimal amount of immunoglobulin-M (IgM) produced in-utero, but insufficient to ensure adequate external protection. Foals acquire that immunity initially through the mare’s colostrum, which should be high in immunoglobulins.

There is a system in the foal’s gut that allows absorption of immunoglobulins during the first 12 to 24 hours of life. The level of absorption decreases during that period, which is why it is essential to have the foal nurse as soon as possible after birth. This is also why it is important to vaccinate mares against tetanus and other infectious diseases in the last thirty to forty-five days of pregnancy. This will assist in ensuring that there are suitable maternal antibodies levels to be transferred to the foal in the colostrum. Another associated important point is that of moving a mare to her foaling location ideally no fewer than 30 days prior to her anticipated foaling date. This allows the mare to develop antibodies against any organisms present in the new environment to which the foal may be exposed in the first few hours of its life, and these antibodies should then be available to the foal in the mare’s colostrum. If the mare is resident in the same barn or farm, the chances that different pathogens may be encountered to which the foal will fail to receive immunity is limited; if however the mare is being moved to a different farm – perhaps to be bred back live cover to a stallion located elsewhere – then the risk is more significant. 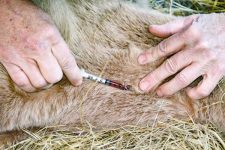 Drawing blood from a foal for an FPT test

Ensuring that a foal receives adequate colostrum is not a guarantee in itself of protection against Failure of Passive Transfer (FPT). There is the possibility that the colostrum may not contain an adequate immunoglobulin level, or that the foal for some reason is unable to absorb them. For this reason, it is always advisable to test the foal’s blood for immunoglobulin levels ideally between 9 and 12 hours after birth. Desirable levels are greater than 800 mg/dL. Levels between 400 and 800 mg/dL should be considered partial FPT which may require supplementation depending upon circumstances. Levels below 400 mg/dL are complete failure of passive transfer and should definitely be supplemented. As the foal’s IgG gut absorption ability has declined to minimal by 15 hours, testing in this time frame still permits oral supplementation if indicated. Testing after 15 hours will require IV transfer to confer immunity if levels are found to be lacking. Stall-side tests are available which are easy to perform if one is able to draw blood from the foal (note that in some countries there are legal restrictions for non-veterinarians perfoming a blood-draw).

Failure of passive transfer has no primary symptoms in itself, other than a predisposition to the foal developing infections. Diagnosis of FPT is by the testing of blood IgG levels. It should also be noted that FPT is not in itself a fatal condition and there are many foals which experience FPT but which never become sick. In order to develop neonatal septicaemia or another threatening condition related to the lack of immunity, the foal must encounter the causative pathogen. It should also be noted that good passive transfer does not guarantee that the foal will not develop neonatal septicaemia or other conditions, but that it is only a stepping stone towards assisting in prevention. 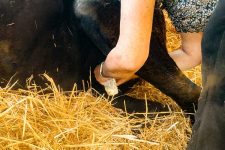 Milking colostrum from the mare – watch those back legs!

Supplementation comes in the form of colostrum from another source or with plasma transfusions through commercially produced serum or plasma products. Oral supplementation must be given prior to 24 hours post foaling, and preferably prior to 12 hours. Colostrum collected from another mare on the same farm can be stored frozen for up to two years with no reduction in IgG levels. The donor mare colostrum should be evaluated for IgG content, for which it can be tested, or an arbitary presumption can be made if the foal from that mare developed good IgG levels. the mare must also have never had a foal experience Neonatal Isoerythrolysis. Intravenous transfers of plasma will be a more reliable method of elevating a neonate’s IgG levels, however the cost is significantly greater than oral transfers and there is an increased risk. Post-supplementation IgG testing is recommended, with a repeated treatment if required, as research has shown that multiple doses of oral colostrum or serum may be required to achieve adequately elevated levels, compared to IV plasma. 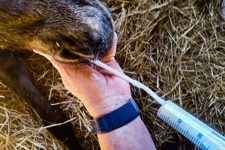 Feeding the neonate using a syringe and section of insemination pipette

Some farms will milk colostrum from the mare and feed it to the foal shortly after birth as a matter of routine. The mare can be milked if she is accepting of people in the foaling stall before she rises – although care must be taken both to avoid the mare getting up too soon (if the umbilicus has not yet separated) and interrupting the mare-foal bonding process. Feeding the foal colostrum can be a useful technique to ensure that the foal gets a good amount of colostrum early. It does not however guarantee passive transfer, as there are still other possible reasons for failure – for example low IgG in the colostrum or an inability within the foal to absorb the IgG. Testing the foal is therefore still recommended. The colostrum can be tested using a colostrometer or other device to determine specific gravity which can correlate to IgG content. Extreme caution must be taken to avoid the foal aspirating (inhaling) colostrum if the foal is fed in this manner, as pneumonia is a likely sequela should that occur. The colostrum should initially be trickled into the foals mouth, and most foals usually quickly adapt and will start suckling from the bottle or feeding pipette that is being used.

© 1999, 2019, 2021 Equine-Reproduction.com, LLC
Use of article permitted only upon receipt of required permission and with necessary accreditation.
Please contact us for further details of article use requirements.
Other conditions may apply.