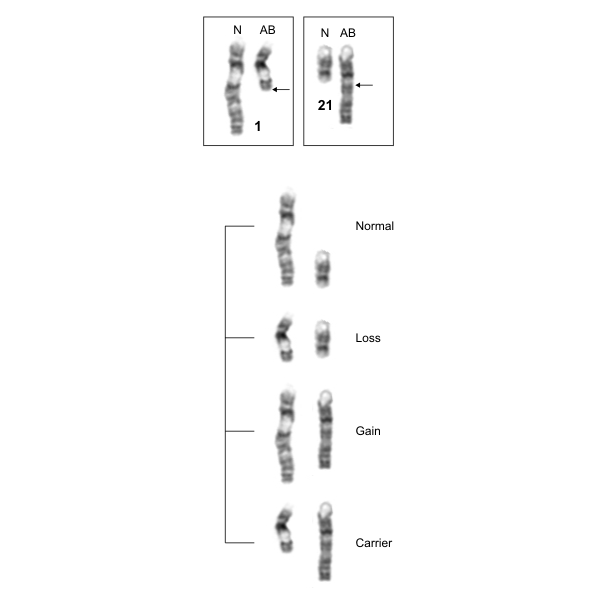 – Chromosomal translocations in horses may be a cause of early pregnancy loss or pregnancy failure. Dr. Teri Lear discusses the issue.

Chromosomes are large segments of DNA wound around special proteins within each cell’s nucleus. They contain nearly all of the body’s genetic material. Horses have 64 chromosomes (or 32 pairs) including the two sex chromosomes (XY in males and XX in females). The sire and dam each contribute 32 chromosomes to their offspring. Modern cytogenetic methods enable the identification of all 32 pairs of chromosomes based on their unique features. The features of each chromosome pair are compared in a chart, or karyotype, to identify abnormalities.

At cell division, chromosomes replicate and segregate into daughter cells. Sometimes during egg or sperm formation, chromosome replication and segregation can go awry, resulting in an abnormal chromosome complement being transmitted to the offspring. If the chromosomal abnormality is severe, it can result in early embryonic loss. 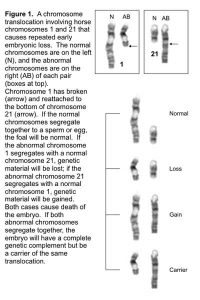 Chromosomal translocations in horses have been rarely documented and all have caused repeated early embryonic loss (REEL). REEL can be quite costly due to additional costs for veterinary care, boarding, and transportation. Oftentimes an entire breeding season is lost. Until recently, only two equine chromosomal translocations had been described in literature. The first case was a mare that produced only two foals in seven years. The second was a stallion with a high incidence of early embryonic loss in the mares to which he was bred.

Recently, we identified different translocations in four mares experiencing REEL. While the reproductive history for each mare is somewhat different, all four mares lost embryos multiple times over multiple years and always prior to day 65 of gestation. All four mares had normal reproductive tracts and estrous cycles. Once in foal the mares had normal ultrasound exams between days 14 and 21. However, in some mares the embryo’s heartbeat was lost by day 28.

One mare always lost the embryo between days 45 and 65. Hormonal treatments were ineffective. Combined, all four of the mares produced only six foals in 30 breeding seasons. One mare produced two foals over the last 10 years. The second mare produced three foals over eight years. Blood samples from two of her foals were submitted for karyotyping. The results showed that one foal had a normal karyotype, and the other foal carried the same translocation as the dam. The third mare had been bred for six years but never produced a foal. The fourth mare produced only one foal in six years.