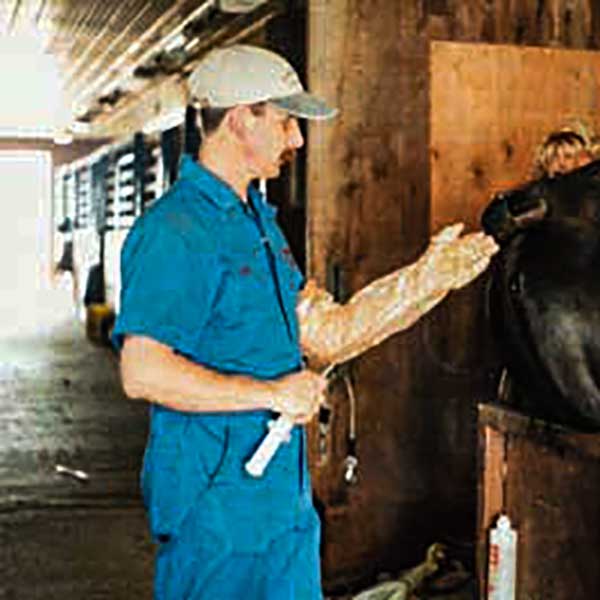 – Artificial Insemination of the Mare is not a difficult task to perform. Here we describe using an aseptic technique in detail.

The actual process of artificial insemination of the mare is not complicated, and can be learned very quickly. Unlike artificial insemination in cattle which involves guiding the insemination pipette through the cervix via manipulation per rectum, equine AI is carried out completely vaginally. The equine rectum is not as durable as a bovines’, and it is for this reason that rectal palpation by the lay person is not encouraged by most veterinarians and teaching facilities.

In countries where international movement of cooled semen is easily achieved, all necessary health status documentation should be reviewed prior to insemination, and universally it is important to ensure that accompanying paperwork and/or semen identification confirms the identity of the stallion as being the correct one booked to breed the mare about to be inseminated – collection and shipping mix-ups do happen!! Well-organized stallion farms will place the name of the stallion in many places on the shipment – on the outer container, on accompanying paperwork and on the semen container – a syringe, centrifuge tube or plastic bag – itself. This certainly assists the mare owner or their veterinarian, and reduces the risk of mix-ups. 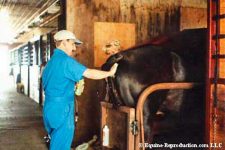 The mare is ideally secured in a palpation chute (aka “breeding stocks”). Her tail is wrapped and deflected to one side where to avoid recontamination, once her perineum is washed it should remain throughout the whole insemination process. Insemination per vaginum does mean that one of the most important parts of the process is preparation during which the perineal area must be cleansed. Anti-bacterial scrubs may be used such as “Betadine”, however arguments are to be made against such use – or even the use of soap. It has been shown that washing the stallion’s penis with antibacterial agents or soap may remove the natural protective flora and result in a subsequent overgrowth of opportunistic pathogens (Bowen, J.M., Tobin, N., Simpson, R.B., Ley, W.B., Ansari, M.M. 1982, Effects of washing on the bacterial flora of the stallion’s penis. Journal of Reproduction and Fertility, Suppl. 32:41-45). The same effect was shown following washing of the mare’s perineum (Ley, W.B.). In particular with mares that are to be bred multiple times during a cycle therefore, we recommend washing solely with clean water. This practice may be applied to all mares being bred. The perineal area is cleansed using an aseptic technique, starting centrally and working outwards. Once the outer (uncleaned) section is reached, the disposable paper towel or cotton is discarded, and a new piece used to return to the center to wipe outwards again. The final pass should involve a little greater pressure to remove any surplus surface scrub liquid remaining, so that it may not carried into the vagina during AI. The region may be blotted dry using a single pat with clean paper towel. A “clean hand, dirty hand” technique should be used, whereby only the designated clean hand enters the water bucket, transferring the paper towel or cotton to the other hand which is coming into contact with the perineal region. The two hands must not be interchanged during the washing process. 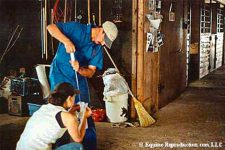 Once the mare is prepared, the semen is removed from the shipping container and if not already in a syringe (some containers transport the semen in a syringe or insemination bottle), the insemination sample is drawn moderately slowly through the insemination pipette into the syringe. As elsewhere with the process, aseptic technique is important here too. Note that nobody is touching the pipette, which once the syringe is filled will be placed back into its sterile packaging until it is later introduced into the mare’s vagina in order to inseminate. A useful method (not being used here) is to cut the distal end off the pipette packaging and slide the pipette out through the cut portion, which allows the outer packaging to be held while exposing the pipette tip, giving a greater control over the end of the pipette for guidance into the semen container. Including 3 to 5 ml of air in the syringe allows one to clear semen from the pipette when inseminating. Once the semen has been drawn up, the end of the outer covering can again be slid over the end of the pipette protecting it until needed. If a “disposable shipper” is being used, it is likely that the semen is shipped in a syringe, and all that needs to be done is to remove the sealing cap from the tip of the syringe and attach a pipette. Note that syringes used for insemination or shipping of semen should be all-plastic rather than having a rubber plunger. The lubricant covering the rubber plunger tip may be spermicidal with some stallion’s semen. 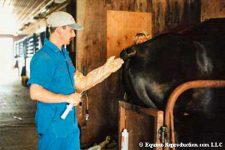 The tip of the pipette is help in the palm… 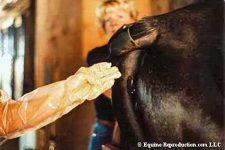 … with the thumb protecting the pipette opening

After placing sterile lubricant on the back of a gloved hand (a single-packaged sterilized sleeve may be used, or a glove from a regular box of rectal sleeves having been reversed to ensure maximum cleanliness), the inseminator smears the lubricant over the mare’s vulva. One does not want to get lubricant on the inside (palm side) of the fingers. The gloved thumb is placed over the end of the pipette prior to its introduction into the vagina, with the pipette tip held in the palm of the hand. This prevents the pipette from picking up any contaminants which may subsequently be inseminated into the uterus along with the semen. The hand is introduced vertically between the vulval lips, rotating the hand to a horizontal plane as it is brought over the back end of the pelvic opening. The hand is kept dorsal (upwards) towards the roof of the vagina to avoid accidental introduction into the urethral opening. Once the cranial (head-ward) wall of the vagina is encountered, the fingers are dropped downwards to identify the cervix – which should be found on the ventral (bottom) surface of the cranial portion of the vagina. The closer the mare is to ovulation, the more relaxed the cervix tends to become. In the center of the cervix will be found a small depression, which is the opening to the uterus (the cervical os). One of the most apt descriptions of a cervix is that it is like a “small volcano” in shape protruding into the vagina. The inseminator will gently introduce the tip of the index finger through this depression, and then using the finger as a guide, slide the insemination pipette along it and into the uterus. It is important not to force the pipette at any point, as internal damage may occur if that is done, nor in most cases does the finger need to be introduced further than about the top knuckle (i.e. approximately 1 cm, or a half-inch). 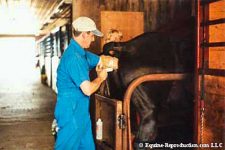 Inseminating – note that the arm is not very far into the mare.

The tip of the pipette is advanced until it is introduced into the uterus approximately an inch, or as far as possible without any resistance being met (whichever is less). If the syringe has an offset Luer tip, that should be located towards the bottom, and in all events, the syringe should be elevated slightly above the pipette. This will allow the air bubble which was introduced when the semen was drawn up to be the last thing to pass into the pipette, which will clear the pipette of semen. The plunger of the syringe is slowly depressed pushing the semen into the uterus, achieving artificial insemination of the mare. It is important that excess air is not introduced into the uterus, and with fresh or cooled semen, ideally a very small portion should remain at the very end of the pipette when it is removed from the uterus. With lower volume frozen semen insemination doses, it is typically undesirable to leave any in the pipette, and often a second syringe with warmed semen extender is used to replace the insemination syringe after the semen has been deposited in order to “flush” any sperm remaining in the pipette. This protocol should be used with caution, as the use of an incorrect extender may affect fertility of the frozen semen. Once the semen (and “chaser” extender, if used) has been deposited, the arm is withdrawn from the vagina moderately slowly to avoid any suction effect.

It should be noted that while care and caution if of obvious importance with artificial insemination of the mare, being too slow – particularly when introducing the hand into the mare – can result in the mare becoming fractious and irritated. Consider how rapidly the stallion introduces his penis when breeding, and one will appreciate that the mare is more naturally conditioned to rapidity than tardiness!

Performing artificial insemination of the mare is the easiest part of the artificial breeding process. In the US, it is typically not regulated if it is being done on one’s own mares, or those of one’s employer. Indeed, in most states and Canadian Provinces, it is considered an “exempt procedure” under Veterinary Practice Acts. There are however exceptions, and in other countries – notably the EU and UK – it requires successful completion of an approved training course and issuance of an exemption in order to be able to legally inseminate mares. We offer such a DEFRA-approved course periodically in the UK, and this is outlined elsewhere on our site. The important point therefore, is to confirm legality specific to your own location before performing AI.

© 1999, 2014, 2020 Equine-Reproduction.com, LLC
Use of article permitted only upon receipt of required permission and with necessary accreditation.
Please contact us for further details of article use requirements.
Other conditions may apply.