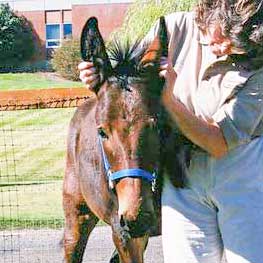 By Kathy St.Martin and Jos Mottershead

In 2001, Don Jacklin’s prize mule, Taz, was making his mark in history by beating the best racing mules at the California State Fair. While most people won’t recognize Taz for his racing victories, he will probably be well remembered for being the full sibling to the first successfully cloned equid!

Don Jacklin wanted to repeat his racing success by duplicating Taz. Unfortunately, breeding mules is a dead end proposition. The product of crossing a female horse and a male donkey, the resulting hybrid, a mule, is usually sterile. Consequently, Mr. Jacklin needed to look for an alternative if he wished to use Taz in his breeding program. It was at this point that he contacted Northwest Equine Reproduction Laboratory in Moscow, Idaho. Working together with the University of Idaho, and Utah State University, Dr. Vanderwall headed up a team of scientists and geneticists to attempt what, to date, had never been done successfully.

On May 29, 2003, the University of Idaho announced the successful cloning and resulting birth of “Idaho Gem”. Born on May 4th, 2003, Idaho Gem is the result of the cloning of a 45 day embryo which was the product of breeding Taz’ sire and dam. The University is still awaiting the arrival of two other clones that were produced from the same embryonic tissue.

The first clone every produced was a tadpole in 1952, created using embryonic cells. Cloning made headlines in 1997 when Scottish scientists created “Dolly”, a Finn Dorset sheep. Dolly’s creation was significant in that she was the first mammal cloned from the cell of an adult animal. Since Dolly, researchers have cloned a number of large and small animals including sheep, goats, cows, mice, pigs, cats, rabbits, and a gaur.

While hundreds of cloned animals are in existence today, not all species can be replicated at this time. Attempts at cloning certain species such as monkeys, chickens, dogs and up until now, the equid, were unsuccessful. Removing the nucleus from the egg cell and replacing it with the nucleus of a donor cell is traumatic to the cell. While some species appear to tolerate the process well, many species appear to be more resistant to cell nuclear transfer. 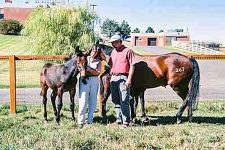 Researcher Dr. Vanderwall and Equine-Reproduction.com’s Kathy St. Martin with two of the cloned mules and a recipient mare

Two years after the successful cloning of Dolly and half way around the world from that achievement, the University of Idaho, were stacking up significant triumphs. In the year 2000, the researchers managed to produce 2 pregnancies that did not result in a live birth. In 2001, they were able to repeat their success 5 times including an embryo that had a heartbeat. Unfortunately, none of those pregnancies resulted in a live birth either. However, in 2002, 14 pregnancies were realized, three ultimately developed heartbeats and 1 has now resulted in a live birth. The other two are still viable and their arrivals are imminent [see footnote].

Researchers believe that their success can have a major impact on the preservation of endangered species such as Przewalski’s horse.

Footnote: On June 9th and July 27th 2003, second (“Utah Pioneer”) and third (as yet unnamed) cloned mules were born to join Idaho Gem and increase the success of this ground-breaking research project. 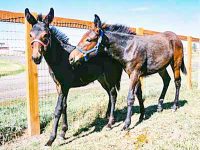 Idaho Gem and Utah Pioneer play together in their pasture at U. Idaho’s NERL

© 2003 Equine-Reproduction.com, LLC
Use of article permitted only upon receipt of required permission and with necessary accreditation.
Please contact us for further details of article use requirements.
Other conditions may apply.